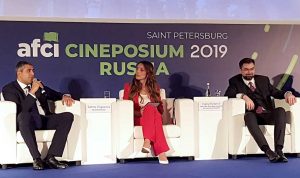 This year, Cineposium offered a unique platform, uniting the United Nations World Tourism Organization (UNWTO), representatives from the world film industry and representatives from the international and federal media. Critical topics presented at Cineposium include the rise of content and its impact on a territory’s capacity, global film tourism and screen industry development. In addition to showcasing St. Petersburg as a destination for film, television and other forms of production, Cineposium helped to establish co-production links between domestic and foreign filmmakers.

“The growth of ‘film tourism’ presents exciting new opportunities for AFCI to work with UNWTO and other organizations to expand Cineposium’s global reach and relevance,” added Conoplia.

Cineposium is the only international conference focused on connecting film commissioners, production industry partners and policymakers. Over the past decade it has been held in the United States, France, New Zealand, Spain and South Korea. Cineposium is one of AFCI’s two hallmark annual events (the other is AFCI Week held each April in Los Angeles).

For this year’s Cineposium, AFCI was working closely with the Russian Office of Film Commissions and the Committee for Tourism Development of Saint Petersburg for support with venues, programming and production.

Saint Petersburg offered Cineposium attendees a unique, world-class conference experience. The city is known to Russians as the “Window to the West,” and at Cineposium also became a window into Russia’s growing media production industry.