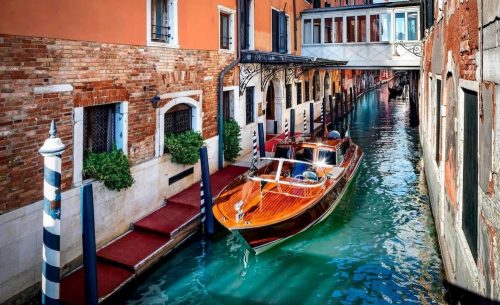 Venice, Italy, January 10, 2022 / TRAVELINDEX / The Four Seasons will add on one of the historic hotels in the lagoon: the Danieli. In Italy, Four Seasons Hotels and Resorts signed on the San Domenico in Taormina and reopened after the complete renovation the Four Seasons in Milan, both owned by the Statuto group.

The Four Seasons Hotels & Resorts, whose majority owner is Bill Gates, will manage the historical Danieli Hotel in Venice, Italy. A plan to restructure and consolidate the building as well as to renovated and refurbish it has already been put forward, with a luxury hotel that would have an inventory of 200 rooms and suites and which will open in 2024. Pierre Yves Rochon has been entrusted to design the interiors of the hotel.

The Danieli is the oldest hotel in Venice, in uninterrupted activity for 200 years. Located near the Piazza San Marco, the Doge’s Palace and the Bridge of Sighs, made up of three buildings: Palazzo Danieli Excelsior, from the twentieth century, Palazzo Casa Nuova, from the nineteenth, and Palazzo Dandolo, in Venetian Gothic style. The Danieli hosted many illustrious guests, from Goethe to Walt Disney. From Charles Dickens to Steven Spielberg. It was Giuseppe Dal Niel, in 1822, who transformed the building into a hotel, the Royal Hotel, known by everyone as “Danieli” after the owner’s name. It changed hands many times and then ended up in the portfolio of real estate developer Giuseppe Statuto, who had bought it in 2005 from Starwood.

About Four Seasons Hotels and Resorts
Founded in 1960, Four Seasons Hotels and Resorts is dedicated to perfecting the travel experience through continual innovation and the highest standards of hospitality. Currently operating 117 hotels and resorts, and 44 residential properties in major city centres and resort destinations in 47 countries, and with more than 50 projects under planning or development, Four Seasons consistently ranks among the world’s best hotels and most prestigious brands in reader polls, traveller reviews and industry awards.