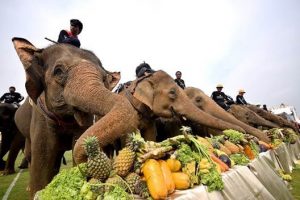 Bangkok (Thailand) – November 17, 2017 (travelindex.com) – Anantara Hotels and Resorts has announced the dates for the 2018 King’s Cup Elephant Polo Tournament. The event will be held by the banks of Bangkok’s mighty Chao Phraya River from March 8th – 11th, 2018 and promises to have a full range of fun elephant festivities for the whole family including an impressive opening parade, children’s educational day, Ladies Day known as The ‘Bangkok Ascot’. Other entertainment will include a pop up foodie market and a host of popular bands and DJs

Now in its sixteenth year, the festival has become one of the biggest charitable events in Southeast Asia with over US$1.5 million (BHT 50 million) raised and donated to projects that better the lives of Thailand’s wild and domesticated elephant population.

Funds from this year’s event were donated to various projects including the Zoological Parks Organisation of Thailand which supports veterinary and educational projects to improve the year-round lives of elephants and mahouts in the Surin Province where ex-street elephants face ongoing hardship. The donations have also funded South East Asia’s first ever workshop to teach mahouts and vets the benefits of Environmental Enrichment to keep elephants happy as well as the construction of a watch tower in a village whose crops are raided by elephants, allowing villagers to watch and warn other villagers of approaching elephants in a safe manner for both people & elephants. Donations also funded a conservation education trip to a National Park for the children and next generation of hereditary mahouts to learn the importance of elephants in the wild; the transport of Thai elephant vets to international conferences; funding Thai Government aid to teach mahouts to act as veterinary assistants and provide basic first aid and other medical care to their elephants; as well as community based Human Elephant Conflict mitigation projects in two Thai and one Tanzanian National Parks and the purchase of equipment for anti-poaching rangers in a Cambodian National Park.

Other significant benefits from the money raised by the tournament include: the ongoing Thai
Elephant Therapy Project which has been underway since 2009 in conjunction with Chiang Mai University’s Department of Occupational Therapy, with future clinics to include children with Down’s syndrome and other conditions now committed until the end of 2018 as well as the funding of Asia’s first workshop to show traditional elephant trainers and camp owners the benefits of Positive Reinforcement Training for captive elephants with additional workshops this year in Myanmar reaching teams responsible for over 200 elephants. Past projects include the donation of a THB 500,000 gantry to the Thai Elephant Conservation Centre (TECC) to help lame elephants stand which is still in operation; and the planting of an elephant corridor of 4,000 trees in Hua Hin to stop farmer vs. elephant conflicts.

A total of 20 unemployed ex-street elephants will take part in the event, during which they will receive full veterinary checks from the Zoological Parks Organisation of Thailand, under the patronage of His Majesty the King of Thailand and the Department of Livestock Development. In addition, all elephants are given essential vitamins, food and care which are not available to them during their normal daily lives.

The welfare of the elephants that participate in the King’s Cup Elephant Polo Tournament is of paramount importance, with strict rules ensuring that the pachyderms are well cared for at all times. By imposing a “no micro-chip, no game” rule, Anantara guarantees that all participating elephants have been domestically bred and not captured from the wild or smuggled in from neighbouring countries.

The annual event was awarded a silver medal for Sports CSR Initiative of the Year at the Asia Sports Industry Awards in 2016. Anantara has long been associated with elephant conservation efforts with the formation of The Golden Triangle Asian Elephant Foundation, which has performed over 60 rescues of elephants off the streets of Thailand. For more information on the 16th Annual King’s Cup Elephant Polo Tournament, please visit www.anantaraelephantpolo.com.

About Anantara
Anantara is a luxury hospitality brand for modern travellers, connecting them to genuine places, people and stories through personal experiences, and providing heartfelt hospitality in the world’s most exciting destinations. The collection of distinct, thoughtfully designed luxury hotels and resorts provides a window through which to journey into invigorating new territory, curating personal travel experiences.

From cosmopolitan cities to desert sands to lush islands, Anantara connects travellers to the indigenous, grounds them in authentic luxury, and hosts them with passionate expertise. The portfolio currently boasts over 35 stunning properties located in Thailand, the Maldives, Indonesia, Vietnam, China, Cambodia, Sri Lanka, Mozambique, Zambia, the UAE, Qatar and Oman, with a pipeline of future properties across Asia, the Indian Ocean, Middle East and Africa.