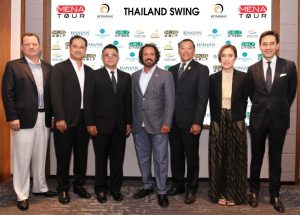 Bangkok (Thailand) – March 1, 2017 (travelindex.com) The seventh season of the MENA Tour will include a Thailand swing, with three of Thailand’s leading golf clubs hosting tournaments here in May. The MENA Tour, whose ambassador is Ryder Captain Darren Clarke, is an initiative by the Sheikh Maktoum Golf Foundation. Last year professional and amateur players from over 20 countries competed, and in 2017 the tour will include 16 tournaments held in Africa, Europe, the Middle East and Asia.

The tour’s Thailand swing will start with the MahaSamutr Masters 2017 sponsored by MahaSamutr Country Club Hua Hin, a 54 hole tournament hosted by the Banyan Golf Club in Hua Hin on May 2nd – 4th. Then the tour will visit Korat for the Mountain Creek Open on May 8th – 10th at the Seve Ballesteros designed Mountain Creek Golf Club. The final of this year’s Thailand swing will be the 72 hole Pattana Golf Championship, sponsored and hosted by the Pattana Golf Club and Resort in Chonburi on May 16th-19th 2017.

All three tournaments will be shown on TV across the world, including Fox Sports and True Sports here in Asia.

Mohamed Buamaim, Chairman of the MENA Tour said, ‘ Six years ago we set out to provide a platform for up and coming professional and amateurs golfers to compete. Now in 2017 the MENA Tour has expanded to enable players from over 22 countries to participate for World ranking points, at over 16 tournaments held across four continents. Here in Thailand we are delighted to also welcome members of the Thai PGA and the All Thailand Golf Tour to join us at these three leading golf courses.’

Veeranat Limprasutr, Head of Business Development and Director of Operations at  MahaSamutr Country Club in Hua Hin said, ‘We are honoured to be sponsoring  the MahaSamutr Masters for the second year. To support this year’s event, MahaSamutr Country Club will also be offering a special promotion for new members competing in the Pro -Am tournament on April 30th, to get the chance to win a spot at the Dean & Deluca Invitational Pro -Am in Fort Worth Texas USA. ”

“Banyan GC is proud to be host venue for a second edition of the MENA tour to build on the success of last year. We have two objectives in mind and that is the commercial aspect from the media exposure MENA tour provides our club and CSR to promote the development of golf in Asia by providing players the opportunity to compete at a professional standard in Thailand”, added Stacey Walton the General Manager and Director of Banyan Golf Club.

‘Our club and all our staff are very excited to be hosting this prestigious tournament ,The Mountain Creek Open sponsored by Golf Citizen, up in the beautiful countryside of Korat,’ added Kamolsut Dhabbaransi,  Business Development Director for PM Group and Mountain Creek Development Company Limited.

The Pattana Golf Championship is being hosted by Chonburi’s Pattana Golf Club and Resort. Ms Rujirapun Juangroongruangkit, the club’s Executive Vice President said, ” As one of Thailand’s leading all round sports venues, we are confident that all the local and international players will enjoy competing at our course for the first time, and to be able to relax at our vibrant resort.’

The MENA Tour has the support from the Arab Golf Federation plus the R&A, and is aimed at the best MENA National Amateur and Professional players, along with eligible players from the around the world. The official 2017 season runs from March to December, and culminates with the Tour Championship.
Each tournament receives official R&A recognition for World Amateur Ranking and Official World Golf Ranking status.   Player’s benefits include invites to play in major tournaments including the Omega Dubai Desert Classic and the Hassan 11 Trophy on the European Tour, the Sunshine Tour plus entry to Q School on the Asian Tour.

For more information check out www.menagolftour.com