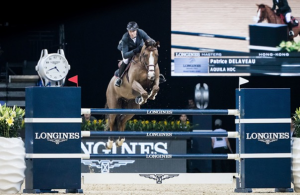 After a gripping competition over 1.6m obstacles, on a course etched out by internationally-renowned course designer Louis Konickx, French Patrice Delaveau, astride Aquila HDC, took top honors, ahead of second-placed Max Kühner of Austria on Cielito Lindo 2 by just 0.07 seconds in the jump-off, and Longines Grand Prix of Paris 2017 winner Daniel Deusser of Germany on Cornet D’Amour, who was in with the chance of a €2.25 million bonus if he’d also won in Hong Kong, in third.

Juan-Carlos Capelli, Vice-President and International Marketing Director for Longines, who handed the Longines Grand Prix to the winner, along with an elegant Longines watch.

With the crown of this evening’s Longines Grand Prix in hand, Delaveau has an excellent chance to collect the Grand Slam Indoor bonus of €1 million if he can win the Longines Grand Prix at the final leg of the current season of the Longines Masters Series, in New York, and follow it up with a win in Paris at the start of the 2018-19 season.

“It was great today, and my horse was fantastic,” said victorious rider Delaveau, “I love it here in Hong Kong.”

The other competition of the final day, earlier in the afternoon, the Masters One DBS, presented by new Official Partner DBS, featured a strong field competing over 1.45m obstacles. It was Great Britain Robert Smith who showed the determination and grit to come off victorious on 11-year-old gray gelding Cimano E, clocking a time of 57.17 seconds ahead of Christian Kukuk of Germany on Cordess, and Gerco Schröder of the Netherlands on Glock’s Debalia, who finished second and third respectively.

Earlier in the day, Hong Kong’s own Nathaniel Chan and Lay Your Love On Z won the JETS Junior Trophy, a competition that gives local fans a chance to cheer for home-grown talents from the next generation as they aspire after high-level honors in a five-star international arena. The young hopefuls were put to the test on a specially designed course in a Grand Prix format across two rounds. Both rides counted, with the winner decided by the fewest penalties across both and the best time in the second.

An Event to Remember
Pansy Ho, Bill Hornbuckle, Adrian and Bonnie Li, Jimmy and Emily Tang, Andy and Flora Kwok, Roger Ngan, Veronica Lam, together with more socialites and VIPs made an appearance at the Longines Masters Club over the weekend.

They were joined by a full house of fans, who thrilled to the prestigious three-day showcase which twins some of the world’s top showjumping action with stylish lifestyle experiences and entertainment for all ages.

The success of the Longines Masters Series has also been recognized by experts, with an award of Best Live Experience at a Professional Sporting Event by the Sports Industry Awards Asia. The 2018 edition of the Longines Masters of Hong Kong has also confirmed its “M” Mark status helping to enhance the image of Hong Kong as Asia’s sports event capital. The “M” Mark, awarded by the Major Sports Events Committee, symbolizes intense, spectacular and signature event on the territory’s sports calendar.

The glamor and elegance of the event were echoed in the Prestige Village, where sophisticated luxury lifestyle took center stage, shining the spotlight on contemporary art, champagne and wine tastings alongside numerous fine-food outlets, and late-night musical performances from MC RiverJaxx and DJ Jérémie Charlier.

The Prestige Village was brought to life by a selection of suitably high-end exhibitors, among them Title Partner Longines, which displayed a collection of horological masterpieces in its elegant boutique; Official Partners DSB and Maserati, and an extraordinary collection of artistic masterpieces from Macey and Sons, including works by Cézanne, Turner, Constable and Ai Weiwei.

The Asian leg of the Longines Masters Series was given a major boost by the launch of EEM.tv, a new milestone in EEM’s mission to grow and promote equestrian sports on the international scene through educational content, information and the latest news about the global equestrian community. This new digital TV channel allowed viewers around the world to access live broadcast and highlights of all the Longines Masters competitions free of charge.

The so-called Alchemist Horsewoman Clémence Faivre put on the enchanting equestrian performances Fuego and Romeo throughout the weekend, keeping audiences spellbound with her dazzling combination of creativity and equestrian talent.

Today on the Red Carpet
The final day of the Longines Masters of Hong Kong once again attracted a wide range celebrities, like Kelly Fu, Daniel Chau, Matthew Ho, Emily Wong, who appreciated its combination of top-level sporting action with fine dining and culture.

Thank you, Hong Kong. See You in New York!
“Our ambition has always been to give equestrian sports the most incredible international stage. The Longines Masters Series brings together the Best of Sports and the Best of Lifestyle, with the 3 iconic capitals for backdrop: Paris, Hong Kong, New York” said Christophe Ameeuw, CEO of EEM and Founder of the Longines Masters Series.

And so, the curtain goes down on the Asian leg of Season III of the Longines Masters Paris – Hong Kong – New York. Attention now turns to New York, which hosts the third and final leg of the Longines Masters Series. The American stage presented by equestrian artist Clémence Faivre to the tempo of Amazing Grace, is set to break ground, taking up new quarters in 2018 in New York, at NYCB Live from April 26 to 29, 2018, unquestionably the world’s capital for business and lifestyle, and city that calls nothing impossible.

About EEM
A passionate of equestrian sports, Christophe Ameeuw – CEO of EEM and Founder of the Longines Masters Paris-Hong Kong-New York Series – founded the Ecuries d’Ecaussinnes in 1997. Based in Belgium, the stables are internationally reputed for their activities in trading sport horses and highstandard breeding. They are also home to an offering some of the best teaching available in the field. In opening EEM, Christophe Ameeuw and his teams were in pursuit of a challenge: to reinvent show jumping by organizing equestrian events of an entirely new kind. The company built its development by creating the concept of the “Masters”, which together, under the same roof, the best of show-jumping,
resplendent displays and art de vivre. After the successes of the Audi Masters in Brussels and the Gucci Masters in Paris, EEM came out with one of the world’s most prestigious equestrian events, the Longines Masters Series, on three continents, in Paris, Hong Kong and New York. Inspired by the Grand Slam in Tennis, EEM created a concurrent “Grand Slam Indoor of Show Jumping”, approved by the FEI, this intercontinental challenge is offered to the world’s elite in show jumping, with two prize levels: The Super Grand Slam – a €2,250,000 super bonus for the three consecutive wins in the Longines Grand Prix, in the season order – The Grand Slam – a €1,000,000 bonus for three successive victories at Longines Grand Prix straddling two Longines Masters seasons.

In 2017, EEM will be creating a new iconic competition, the Riders Masters Cup. Offered to the public alongside the EEF (European Equestrian Federation) and alternating between Europe and the United States, this battle will pit the world’s two leading powers in show jumping against one another: Europe and the United States. On the Asian continent, “Asia Horse Week”, rallying point for the international equestrian community there, also serves as a prime setting for the Longines Masters of Hong Kong, illustrating EEM’s determination to develop the sport’s international arms in the Asia-Pacific Region. Firmly set on putting equestrian sports front and center and making them accessible to all, EEM rolled out a new digital TV channel on November 14, 2017. EEM.tv offers viewers the chance to follow live and free of charge all EEM events worldwide.

About the Longines Masters
Set in the three of the world’s most emblematic metropolises – Paris, Hong Kong and New York – the Longines Masters series is recognized as one of the most prestigious events in the equestrian world. Created by EEM and inspired by the Tennis Grand Slam, the series quickly expanded their international reach (Hong Kong in 2013, Los Angeles in 2014). In 2015, the intercontinental trilogy turned into the Longines Masters Series. Alongside it, EEM created the “Grand Slam of Indoor Show Jumping”, approved by the FEI, the Grand Slam Indoor is the ultimate challenge for the world’s elite in show jumping, with two levels of prizes: The Super Grand Slam: a bonus of 2.25 million Euros for winning 3 consecutive Longines Grand Prix in the same season. The Grand Slam: a bonus of 1 million Euros for three successive victories in the Longines Grand Prix from one season to the next. The TV broadcast of the Longines Masters Series reaches to over 120 countries, almost 320 million households, a coverage increased this year by the launch of EEM.tv, the new digital channel of EEM. It allows everybody to freely livestream the all competition and events during the four days. Save the date: Hong Kong 2018: February 9th – February 11th, New-York 2018: April 26th – April 29th

About Longines
Based in Saint-Imier, Switzerland since 1832, the watch-maker Longines can lay claim to know-how honed through tradition, elegance and high-performance. Its long-lasting involvement in sports’ timekeeping at world championships and as partner to international federations has helped Longines develop solid, lasting bonds with the world of sport. Renowned for the elegance of its timekeeping devices, Longines is a member of Swatch Group SA, the world’s leading maker of time-keeping products. With a winged hourglass as its emblem, the brand is established in over 150 countries.