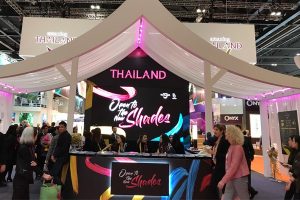 London (England) – November 8, 2017 (travelindex.com) – The Tourism Authority of Thailand will use the World Travel Market 2017 (WTM), one of the world’s leading travel trade shows, as a platform to launch its new marketing concept, “Open to the New Shades of Thailand”.

This year, the Thai pavilion at the WTM will have a total of 35 exhibitors including 29 Thai hotels, 4 tour operators, 1 airline and 1 other tourism-related agency. A number of other Thai exhibitors will be participating via independent pavilions. These will include Bangkok Airways and the Sports Authority of Thailand where visitors will be able to find sports tourism products; such as, “Muay Thai Angel” (Thai female boxers) including some information of the MotoGP World Championship in October 2018, at the Buri Ram Circuit.

The WTM is considered as the perfect platform to launch the new TAT campaign, “Open to the New Shades of Thailand”. This will reflect another kind of “Thainess”, which is the unique characteristic of the Thai people to welcome visitors of all “shades” from all around the world.

It will reach specific target segments; such as, Luxury travellers, Weddings and Honeymooners, Female Travellers, Families and Gen Y. Twenty-seven TAT overseas offices have been working with partners and tour operators to convert the campaign into substantial sales targeted at specific customer segments.

The Thai pavilion at the WTM has been elegantly designed to reflect the new campaign, featuring superb handicrafts specially designed by the Support Arts and Crafts International Centre of Thailand (SACICT). These include Ko Kret pottery, Benjarong and Sukhothai silverware.

The opening ceremony of the Thai pavilion will be held on 6 November, 2017. The Minister of Tourism and Sports, Royal Thai Ambassador in London, Chairman of the TAT Board, Governor of the Tourism Authority of Thailand, and Thai and foreign media will be attending the event.

At the Thailand Networking Lunch, the TAT Deputy Governor for Marketing Communications, Mr. Tanes Petsuwan will address the audience with a comprehensive update of the Thai tourism situation as well as tourism products and services to be included in the “Open to the New Shades of Thailand” marketing theme.

On 7 November, 2017, the Amazing Thailand Happy Hour will be held at the Thai pavilion. This will be a more private opportunity for a select group of Thai tourism exhibitors (Sellers) to meet with 300 specially invited tour operators (Buyers), media and distinguished guests to network and establish business contacts.

Thai food will be served alongside entertainment by the Suanplu Chorus Orchestra, and the function will be opened for agents and media.

The United Kingdom is Thailand’s second most important European market, and many British people know Thailand intimately. From January to September 2017, Thailand welcomed 723,438 visitors from UK. Projected total arrivals from the UK are 990,000.