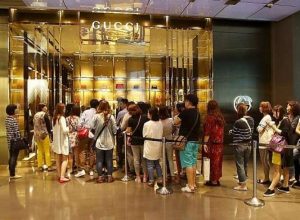 Hong Kong – July 28, 2017 (travelindex.com) – The relaxation of visa regulations for mainland Chinese tourists visiting Hong Kong has dramatically increased the number of arrivals, almost completely changed the tourists’ profiles and altered what they do once in the city, according to Ph.D. graduate Dr Anyu Liu and Professor Bob McKercher of the School of Hotel and Tourism Management (SHTM) at The Hong Kong Polytechnic University. In a recently published article the researchers highlight the extent of changes to visitor behaviour and satisfaction, and note that other countries wanting to adjust their visa regulations to exploit the huge potential of the Chinese tourism market should consider the Hong Kong example and plan ahead.

Outbound tourism from China has long been limited both by the imposition of visa constraints from destination countries and by the Chinese government’s Approved Destination Status scheme. As the researchers note, Chinese citizens can only travel in limited numbers to the scheme’s 146 member countries, usually on group tours.

Yet the volume of Chinese tourists is growing. The number of outbound tourists from China already amounted to 100 million in 2013, with the figure predicted to reach between 200 and 350 million by 2020. Consequently, many countries are rethinking their visa policies to reduce market barriers and fully realize the vast potential of this market. This may seem like good news for destinations, but the researchers point out that it may “have a more profound impact than a sheer volume increase” because increasing tourist numbers and broadening the market base may require destinations to “fundamentally rethink their product offerings”.

The researchers use the example of Hong Kong to illustrate the potential effects of reducing market barriers to Chinese tourists. Although Hong Kong is a Special Administrative Region of China, it has full autonomy over immigration control, and mainland visitors, like all others, require valid travel documents, sufficient means of support and re-entry facilities to their home country. Hong Kong, along with Macau, was one of the first places that Chinese tourists were allowed to travel to after China’s opening up in 1983. Since then, the initially severe restrictions have been gradually relaxed through a variety of measures, particularly the Individual Visit Scheme (IVS) in 2003 and the introduction of multiple-entry permits in 2008.

The researchers suggest that the introduction of the IVS was perhaps the most ground-breaking policy as it allowed Chinese tourists to travel independently rather than as part of organised tour groups. The gradual extension of the scheme has had a huge effect on the market, driving a 13.7% annual increase in visitor numbers through to the end of 2015. A slight drop in arrivals was noted last year.

Multiple entry permits also allowed the residents of nearby Shenzhen to enter Hong Kong as often as they like without restriction, resulting in a 30% annual increase in the number of day visitor arrivals. Yet the policy is highly controversial, the researchers point out, because many of these visitors come to shop in residential shopping districts, where they have “proven to be voracious consumers of household products”, leaving local residents short of basic goods. As a result, the Hong Kong government revised the policy in 2015, allowing people from Shenzhen to visit only once a week, which led to a decline in arrivals by 11% in 2016.

The researchers set out to quantify how the liberalization of visa rules and the consequential increase in Chinese visitor numbers to Hong Kong have affected visitor profiles and behaviour. They based their study on data from the Visitor Profile Reports issued annually by the Hong Kong Tourism Board (HKTB), which are compiled from face-to-face interviews with tourists at their points of departure. Drawing on the results from 1998 to 2012, they divided their observations into two periods – the pre-IVS period from 1998 to 2003 and the post-IVS period from 2004 to 2012.

The HKTB’s interviewers ask visitors about their type of trip, length of stay, travel itinerary, places visited, shopping items and expenditure, satisfaction and intention to revisit. The researchers focused on the “Vacation Overnight Visitor” segment as travellers in this category were most likely to represent the discretionary pleasure tourist market.

The first difference the researchers observe in considering the survey findings is change in the gender ratio, with the proportion of female visitors increasing from around a third of arrivals to more than 60% since the implementation of the IVS. The proportion of married people has declined from more than 80% to less than 70%, the mean age has fallen by 2 years to 36.6 and the share of travel parties including children or grandchildren has increased from 6% to 24%. Overall, the figures suggest a broadening of the market to include more families and more housewives who are traveling with or without their children.

Yet, the researchers point out that the most profound change is that Hong Kong “has evolved to become a single-stay, short break destination” visited mainly by independent tourists on repeat visits. Since the introduction of the IVS, the average length of stay has decreased from 3.5 to 2.5 nights, while the percentage of those traveling independently has undergone an astonishing increase from 7% in 2000 to 80% since 2008, with a corresponding drop in the popularity of organised day tours.

The emergence of the independent traveller free from the confines of the tour group has dramatically altered the behaviour of Chinese tourists. Today’s short-break tourists are proportionately much less likely to visit Hong Kong’s tourist attractions than in the past. The researchers suggest it could be that the opening of more attractions, such as Hong Kong Disneyland, has created greater choice, or that tourists now have the “free choice of where to go”. In fact, now that they have a choice, the majority seem to be more interested in shopping than visiting attractions, as this is the only activity that has retained its popularity over time.

Mainland visitors are, however, buying different types of goods. The researchers note that although the HKTB does not differentiate between consumer goods, designer clothes and high-end fashion items, anecdotal evidence suggests that these items are “among the most popular”, along with items such as snacks and cosmetics. A notable increase in purchases of Western and traditional Chinese medicines may reflect concerns about product safety in China. Overall, China’s new independent travellers are spending more than before.

As these tourists have become more independent, their satisfaction with the destination has also increased. The greatest jump is in satisfaction with shopping, from an average score of 45 out of 100 before implementation of the IVS to around 80 since, which the researchers suggest has occurred because mainland visitors are now free from organised tours and can shop where they wish rather than “being forced into shops sanctioned by tour guides”.

Satisfaction with hotels has also increased as the market has matured and the proportion of package tours has declined. The researchers explain that in the early days, inexperienced Chinese hotel guests were confused by the provision of in-room amenities such as mini-bars, and did not realize that they had to pay for them. Consequently, hotels tended to provide minimal or no amenities, but this situation has changed as Chinese tourists have become more aware and, consequently, more satisfied.

The researchers argue that the changes Hong Kong has witnessed since the liberalization of entry requirements for mainland Chinese visitors could be considered a “harbinger of what will happen” if other countries decide to take similar steps to capitalize on the potential of the market. Yet they caution that the relaxation of visa policies could well result in destinations being “overwhelmed by newly independent tourists”. Countries that aim to do so should recognize and plan for this eventuality by preparing for large increases in tourist numbers and changing their product mix to cater to the demands of a different type of tourist.