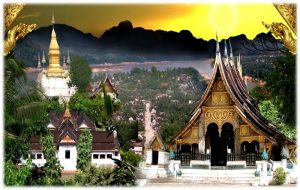 Luang Prabang (Laos PDR) – June 7, 2017 (travelindex.com) – With its exceptional cultural and historical heritage, Luang Prabang is a major tourism destination in Lao PDR. The city experienced a strong increase in international tourist arrivals following its inception into UNESCO World Heritage List back to 1995.

The opening of more non-stop international flights as well as more international hotel chains and boutique hotels will continue to have a positive impact on Luang Prabang tourism evolution in the years to come. In 2017, Luang Prabang is likely to pass for the first time the half-million foreign tourist arrivals’ mark.

Luang Prabang total arrivals generated 6.3% of all international visitors’ arrivals back to 2014, reaching 7.6% in 2015 and 9.5% in 2016. Luang Prabang is now Lao PDR third most visited province by foreign travellers in 2016 after Vientiane Capital and Savannakhet. The province moved up by three ranks, taking over Champassak, Vientiane Province and Khammouane last year.

Transport
Growing air transport connection also explains the continued growth in international air arrivals. Luang Prabang airport was modernized in 2012 with a new terminal and an extended runway which can now accommodate aircraft such as the Airbus A320. The airport welcomed in 2016 over 500,000 passengers and had regular flights to nine destinations from six airlines.

Last year, direct tourist arrivals at Luang Prabang International Airport reached a new record at 140,598, a jump of 14.60% over 2016. This excellent performance was due to the opening of new routes with the AirAsia Group launching two routes to Bangkok and Kuala Lumpur and Silk Air launching weekly services to Singapore. This year will see the launch of a new route to Hong Kong by Air Hong Kong Express and more charter flights to China (Chengdu and Kunming). The airport accounted for 22% of all arrivals and for 30% of all international arrivals to the Province in 2016.

In 2016, Luang Prabang-Vientiane and Luang Prabang-Bangkok had the highest seats’ capacity, respectively of 15,500 and 11,500 seats/month.

By 2022, Luang Prabang will be linked to China PRC and Vientiane by a new 417-km long high speed rail built with the support of China.