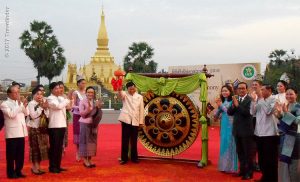 Laos launched its “Visit Laos Year 2018” to promote the tourism industry and revive interest in the country at a time when visits are declining. According to the Director General of the Tourism Marketing Department, Ministry of Information, Culture and Tourism, Sounh Manivong, the Visit Laos Year 2018 campaign will be hosting a number of high ranking officials and journalists from other countries.

In his speech H.E. Professor Dr Bosengkham Vongdara, Minister of Information, Culture and Tourism, Vice President of National Committee for Visit Laos Year 2018 said: “…The festival does not only reflect the fine traditional culture of Laos but also commemorates the success of the fourth restoration project of That Luang Stupa and That Luang Stupa consecration ceremony.

Tourism is an economic sector which has expanded rapidly in several countries around the world. At present, many nations in the world attach special attention to develop and promote their tourism as well as consider tourism a priority economic sector for the socio-economic development of their nations. Over the past years, the government of Lao PDR likewise come to regard tourism as a priority sector for driving the socio-economic development of the country.

Tourism brings spending on goods and services that can boost currency reserves and circulation of money in the country and create more job opportunities for people in service and production sectors, particularly agriculture and handicraft production.

Tourism is a form of export and generates income to local and rural communities in remote regions.

Additionally, tourism pushes for direct and indirect investments and businesses including tour business, hotels, restaurants, transport, souvenirs and so on.
Tourism also pushes investments in infrastructure development such as roads, airports, ports, telecommunication systems, electricity, water supply and so on.

Moreover, the government considers tourism development and promotion as a means for expanding and enhancing cooperation between Laos and foreign countries.
The government has determined the directive for developing and growing natural tourism, historical and cultural tourism based on the Slogan of ‘Visit Laos Year 2018’: “Visit Laos, Experience the Diversity of Nature and History.

The Minister further added: “…The content of the ‘Visit Laos Year 2018’ is designed to:
1 – Push for the implementation of Party’s policies, laws, regulations for managing, developing and promoting natural tourism, cultural and historical tourism;
2 – Concentrate on tourism development in our country to be able to accommodate the number of visitors today and in the future;
3 – Raise awareness and upgrade knowledge of society and people regarding the role and importance of tourism sector in contributing to socio-economic development of the nation and localities;
4 – Tap tourism opportunities and trends of the world, regions and sub-regions into
strongly developing and promoting Lao tourism; regards tourism promotion as a means to enhance under standing and friendships between nations; promote cultural exchange and tourism connectivity between Laos and nations in sub-regions and the world;
5 – Promote the development of small and medium enterprises.

The Visit Laos Year 2018 will comprise activities to be organised in Laos and overseas. These will include festivals in various provinces across the country. Additionally, the Visit Laos Year activities will include festivals which are organised annually by provinces. Exceptional historical, natural and cultural tourism sites in each province are opened for tourists throughout the year.”